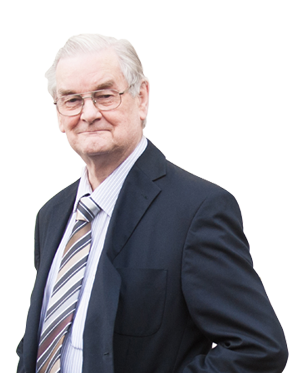 On 18th January 2018 John Waterfield sadly passed away. John was a founding partner of Poole Waterfield in the late 1950’s when he joined the practice of his good friend and former colleague Ron Poole.

From those early days until shortly before he died, John was a constant, much respected and hugely popular figure at Poole Waterfield. In a career that lasted more than six decades John made many friends and accomplished some remarkable things, but invariably with modesty, generosity and humour.

John was a true man of the Black Country, having lived his whole life in Sedgley, Wall Heath and Kinver. After attending the County Commercial College in Wednesbury in the early 1950’s he joined the accountancy firm of Buckler Son & Co in Priory Road Dudley as an articled clerk, and so began John’s long career in accountancy.

John married in 1960 and he and his wife Helen had a son William and a daughter, also called Helen, who both followed their father into the accountancy profession. John was devoted to his family and in later years enjoyed nothing more than spending time with his granddaughter Anna.

A man of many parts, John was a pilot, an accomplished classical pianist, a sports car enthusiast, fisherman and military historian. For all his talents, accomplishments and achievements we will remember him most for his kindness, his mischievous sense of fun and for being a true gentleman.
You are here: home

As another year comes to a close, we take stock of the achievements, new starters and those we have
The cost of success
06/07
As we all know, one of the costs of success in business can be a hefty tax bill, but sometimes this
Our Services